Strong for the young bloods
“…this has been the approach of the Ästhetiker-Jams for 10 years. The main theme of the Ä-Jam-Formats is to push new talents. But how do you encourage motivated youngsters to reach the next level? By bringing them together with the Pros – to draft them like the NHL and NBA.

The best players from the amateur leagues are drafted each year to play in the pro associations. This year the scheme at the Wängl Tängl in Mayrhofen/Tirol is the same, but with one difference: the amateur competition is carried out throughout the whole week whereby the best 15 riders qualify for the main event. The amateur comp takes place on the 14th March and is open to everyone. The Dräft is then carried out on the evening of Tuesday 17th March. The best 15 pro teams are then drawn in sequence to choose one of the 15 dräft candidates from the qualification to complete the teams of 4. The best team is the winner of the Wängl Tängl and the well known Special-Äwards are exceptional this year. The most impressive rider gets a stylish Suzuki DR 125SM motorbike.

The Swedish delegation has been announced, with Kalle Ohlson, Andreas Gidlund and Tobias Karlsson. A Swiss brigade is marching up with Markus Keller, Iouri Podladtchikov and Lukas Blaser. The Pirates from Innsbuck have confirmed their participation with Eirik Haugo, Danny Larsen and Tyler Chorlton. Even though the Ästhetiker are very busy organising the event, remodelling the Vans Penken Park and using heavy machinery and countless working hours to come up with a perfect setup, they will be coming up with two teams. The new design of the Red Bull Endsection is anticipated with a lot of suspense!

The names of the Skaters reads like a who’s who of the skate world: Micky Iglesias, Alex Giraud, Kevin Wenzke, Andy Scott, Sam Partaix, Chris Pfanner, Anders Tellen, Oliver Gordon and Danny Wainwright are highly motivated to dismantle the Mega Miniramp. At the Skate Contest on Wedneday 18th March an open qualification will be carried out, followed by a Best Trick Session where the Pros will warm up for the main contest. The Skateboard finals are taking place on Thursday evening where teams of 2 are due to deliver a sensational show. Directly afterwards 3 rock Bands will be on stage for the Vans Off the Wall night, amongst them Millencolin from Sweden will headline and the UK`s Gentlemen’s Pistols and Jettblack will support. 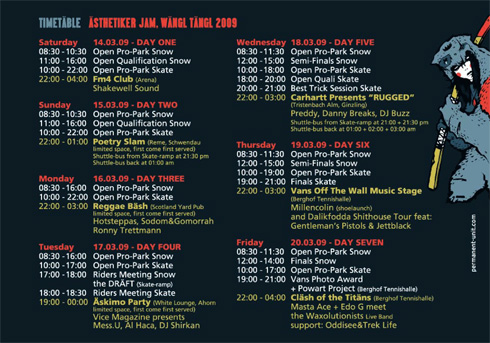 Music will already be in full swing at the beginning of the week. The FM4 Club with Shakewell Sound is opening up the music program on Saturday 14th. After the Poetry Slam on Sunday things continue with Ronny Trettmann and Sodom & Gomorrah in the Scotland Yard Pub. At the Äskimo Party in the Whitelounge on the Ahorn Mountain high above Mayrhofen, Vice Magazine is in charge! Danny Breaks, DJ Buzz and Preddy are at Carhartt’s Rugged in the infamous Trinstenbachalm in Ginzling. Craziness is predicted! For the final party the Ästhetiker have invited two true heavyweights of New York Hip Hop to throw down with Austria`s own Waxolutionists-Live-Band.

The contributing artists at the Wängl Tängl consist, amongst others, of Danny Wainwright, the Permanent Unit crew, Phekt and Fat Cat who are frothing to work together. This year the Pow-Surfers of `Transworld Snowboarding Rider of the Year 2008` Wolle Nyvelt will be the canvas for the artwork. Pow-Surfers are specially shaped boards designed to be ridden in the deep snow without bindings.

Sensational packages are available for the entire week: Prices from 399,- Euro per person per week. Included are 7 nights accommodation with breakfast, liftpass and free party entry for the whole week, entry to the Pro Park Snow and Skate (except during contest hours) and obviously a decently filled goodie bag. Whoever is interested in being part of this week can book online at aesthetiker.com."