Wouldn’t it be great if we had the eyes of a fly? An eye composed of so many tiny eyes that nothing could escape our attention, an eye that would allow us to perceive the world and appreciate the myriads of details around us – just like a picture by Will Kemp. 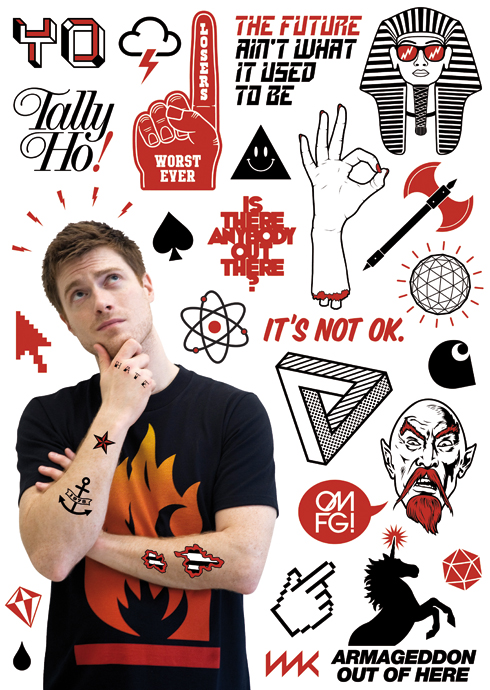 “Hmm. Err. Umm.” These are the words illustrator Will Kemp uses to describe his own work. And indeed, they sum up his creative output pretty well. No matter if you merely glance at an illustration, a picture, or a comic of Will Kemp for only an instance or if you closely scrutinise it for a very long time, these are the words you will use, too: “Hmm. Err. Umm.” Either as an expression meaning something like “Wasn’t there? What was that? Is there really?” or something like “Wow, there is…! Here is…! And this is…!”. And that is the beauty of Will Kemp’s work: On the one hand, his illustrations are easily recognisable; at a first glance they are cool, beautiful and interesting. But on the other hand, they can be like doors to new worlds, opened by details you just don’t perceive right away. Except if you had the eyes of a fly, which are able to capture a million of pieces of visual information in one little wink. Then you would feel really happy when someone with a Will Kemp
illustration on a T-Shirt passed you by.

WILL, WHEN AND HOW DID YOU START? WHAT WERE YOUR INFLUENCES?
I used to draw a lot when I was a child, making books for myself and for my little sisters. I loved books and illustrations and was really into Quentin Blake, “Where the Wild Things Are”, “The Very Hungry Caterpillar”, and Richard Scarry’s “Rainy Day Book”. I didn’t know anything about clothing design then: I was just rocking burgundy OshKosh B’Gosh dungarees and a mighty bowl haircut.

HOW DID YOU AND YOUR STYLE CHANGE OVER THE YEARS?
I got rid of the bowl haircut eventually. On the drawing side, I got more and more into making detailed collage pen drawings while I was at school. Then skateboarding introduced me to graphic design, logos, t-shirts, and falling over a lot. After that I went to St. Martins to study graphic design, which was a weird experience because it seemed like most of the people there cared way more about their hair than about graphic design. I spent a while there trying out various kinds of things without that much enthusiasm before I realised that I should be doing what came naturally instead. After I finished there, I started my clothing label Second Son and that’s how I got into clothing design.

(Selection of designs by Will Kemp)

WHAT ARE YOUR MOST IMPORTANT INFLUENCES TODAY – STILL “THE VERY HUNGRY CATERPILLAR”?
I tend to get obsessed with certain things temporarily – particular shapes, phrases, or subjects. It’s usually stuff I really like the look of, like dinosaurs or pyramids, or it’ll be a word or phrase that I find funny and that keeps revolving around my head until it sounds important.

COULD YOU TELL ME HOW YOU WORK? WHAT IS YOUR PROCESS?
It depends on what I’m doing. I don’t do sketches very often, I tend to think about it instead until I get an idea of what the finished product will look like. If it’s a logo or typography I sometimes draw it out in the air with my finger to work out how it should fit together, which makes me look stupid if I’m on the tube or something. My sketches are awful, they’re a kind of scribbly shorthand and they look like they were drawn by a wild baboon. Then I spend ages putting off doing the actual thing because I know exactly how I want it to look but I’m worried I’ll cock it up.

WOULD YOU SAY THERE’S A CERTAIN ATTITUDE TO YOUR WORKING PROCESS OR YOUR PICTURES?
This is a huge cliché, but I just make images that I like and then hope that other people will like them too. With the commercial work like the Carhartt designs, I’m lucky enough to be given a lot of free rein with what I produce. And then with my own label and my personal work I get to be even more self-indulgent and just spill out my various interests and obsessions.

HOW IMPORTANT IS MUSIC FOR YOUR CREATIVE PROCESS?
I always listen to music when I work. I often end up listening to the same stuff over and over again and it becomes a kind of hypnotic background that helps me concentrate. But I can’t work when there’s music I hate. I’d probably kill myself instead of making images if R Kelly was playing while I was working.

WHAT INFLUENCE DOES THE DIGITAL AGE HAVE ON YOUR WORK?
It’s a big influence because it makes it so much easier to do research for designs. Google image search is amazing as it always throws up a load of completely unrelated things that are funny in their own right, like when you’re looking for pictures of medieval crowns but you get a site about lifelike robot sex dolls instead.

WHAT ABOUT TRENDS? ARE TEMPORARY EVENTS IN OUR URBAN LIFESTYLE IMPORTANT FOR YOUR WORK?
I live slightly too close to Shoreditch, where local hipster fashions come and go so quickly it’s like a tornado of yellow man-tights and pointy elf shoes. Last week the androgynous gypsy wizard look was all the rage, at the weekend it looked like a crackhead cowboy convention, and today I swear I saw “The Worst of the Mohicans”. So I’ve ended up getting pretty inspired for what not to do by
urban trends.

DO YOU THINK ABOUT HOW A PICTURE IS GOING TO BE PERCEIVED WHEN YOU MAKE IT?
I’m terrified by how people will perceive pictures I make. I’m really shy about showing pictures to people, which is pretty stupid since I spend most of my time making images for people to wear on their clothes, so I suppose they actually end up getting exposed to lots of people indirectly. I need to stop being such a wuss. Or maybe just get better at making pictures.

IS THERE ANYTHING YOU WANT TO ACHIEVE WITH YOUR ILLUSTRATIONS?
Money, fame, girls. Oh, and making people think and/or laugh.

WHAT’S A GOOD ILLUSTRATION OR PICTURE FOR YOU?
One that gets the artist money, fame and girls. Not really, I like illustrations where it doesn’t look like the artist is at all concerned with trends but is just doing what comes naturally to them. Also I quite like pictures with unicorns in them.

IS THERE SOMETHING LIKE A MAGIC ELEMENT IN YOUR WORKS?
Unicorns. I don’t think I can answer that without sounding horribly pretentious, sorry…

WHAT IS CREATIVITY FOR YOU?
For me it’s trying to release a stream of what seems like good ideas in my head hoping that they won’t just be crap when they come out.

DOES THAT WORK OUT WITH YOUR COMMERCIAL JOBS? DID YOU EVER HAVE TO MAKE A REAL SACRIFICE OR COMPROMISE BETWEEN ARTISTIC EXPRESSION AND MONEY?
I started off doing freelance illustrations for magazines and advertising and it was frustrating, because with every single job I would submit a rough version first that was accepted. Then I would do the final version according to that, then the client would say they really liked it but please could I completely change all the colours, the composition, the typography, and the background. Then again they were paying for it so I could hardly complain. Maybe I was just bad at it.

WHAT’S THE DIFFERENCE BETWEEN YOUR COMMISSIONED WORK AND YOUR OWN WORK?
At the moment I’m really lucky because with most of the commercial work I do I’m left to my own devices within reason, which is brilliant because I can indulge the same obsessions and interests that I can in my personal work. Basically I seem to be only doing jobs where I get to do what I want. Maybe that’s why I’m so poor.

HOW DOES THAT FIT IN WITH YOUR PICTURES? I MEAN, DETAILS SEEM TO BE VERY IMPORTANT FOR YOU…
Details are very important for me. I get pretty obsessive about details in images, even when they’re so small it won’t even be properly visible. Even for simple things: there’s a kind of detailed simplicity that I like where you can see the thought that has gone into what seems like an uncomplicated image. And with clothes I like the little things that people might not even notice, like lining materials, stitching and buttons. I am a giant nerd.

DO YOU THINK DETAILS ARE SOMETHING FOR NERDS? HOW DO YOU DEFINE “DETAIL”?
I think details are done by nerds but enjoyed by everyone. You can tell when attention to detail has been put into a piece of work or clothing even if you don’t notice the details themselves. With drawing, there are a lot of things that I find funny that I don’t think other people necessarily will, so I bung loads of them together into detailed collages in the hope that people won’t notice if parts of it are crap.

ANY WISE LAST WORDS? SOMETHING YOU WOULD LIKE TO SAY?
Thou shalt not wear glasses with no lenses.