In cooperation with Carhartt the Dubstep platforms Numbers, Butterz, and Desparrame are teaming up to throw a party of very, very epic proportions to bring an end to this year´s Sonar festival at the club Razzmatazz. Here an army of fresh Dubstep, Grime, and 2Step artists will deliver super heavy bass attacks for those who still have some strength in their brains, ears, and legs after three exhausting festival days in Barcelona.

The Glaswegian Rustie comes around with dubstep-ish beats and wonky basslines in order to deliver a messy confusion of many different rhythmic and melodic assaults. Also the Britons Untold, Bok Bok, Deadboy, and L-Vis 1990, who are all known for their merciless live performances, will show up.

To heighten the pleasant anticipation of the spectacular night Elijah & Skilliam (picture above) from Rinse FM put together a mix to promote the bash preliminarily with a bunch of fresh, energetic Grime and Dubstep anthems. 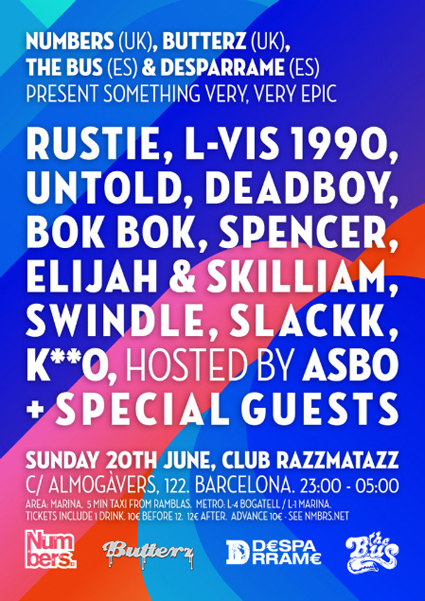