Because since ten years Eddy Ramich organizes weekly the Krontapunkt parties in the Aquarius Club, Croatia’s capital for forward thinking dance music. Beside this, he irregular arranges also the Kontrapunkt Festival. For the jubilee bash he now composed a program that brings House, Downbeat, Broken Beat, Dubstep, Jazz, Soul and Hip Hop together.

Highlights of the two day celebration are guest performances by artists like the British Jazz pontifex Gilles Peterson, Broken Beat godfather Phil Asher, Dubstep prodigy Martyn and the American legend Theo Parrish, who is always good for a wild mix between Disco and House.
Also Eddy Ramich himself plays with his Nu-Jazz Duo Eddy Meets Yannah one of their warm pumping live sets and the New York vocal Jazz enchanter José James flies in for a night full of Soul.

Beside the exquisite line-up the venue as it self is a dream for those who like to dance at beauty spots. Because the Aquarius Club is located directly on the lakefront of the marvelous Jarun Lake.

So come around and feel the vibe of Kontrapunkt. Definitely one of the nicest places for dancing in Croatia! 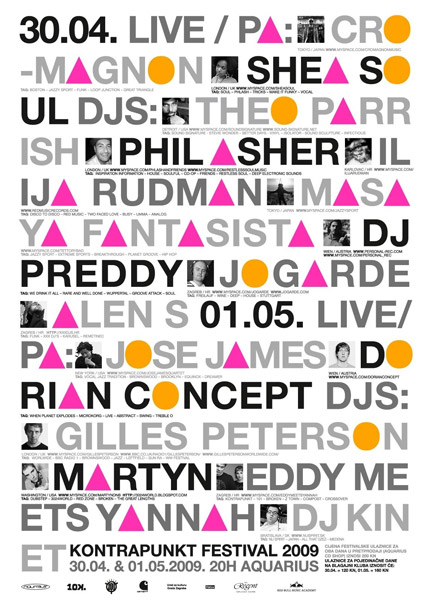