“Elzo Durt is an artist who uses serigraphy as a medium. His works translate the distress and desires of young adults; this mental confusion towards the complexity of everyday life translates into pop colours on surrealist collages.Elzo is inspired by music and vice versa. From rock and electro to hip-hop, the wacky world of Enzo is a rebuttal to the social and moral order, expressed throughout independent music. It’s a relationship where the world of music and graphic design work together through the creation and organisation of album covers or concerts. That’s why ‘School Failure’ is an exhibition as well as a concert. On one side you have an exhibition of works inspired by bands known by the artist. On the other, it’s a concert that brings forward 6 of these bands who’ll be playing on the 22nd of February at the Magasin 4.

And in the middle, 500 serigraphy LPs by Elzo and Bazooka, produced by the label Born bad records with songs by FRUSTRATION, LE PRINCE HARRY, MAGNETIX and MARECAGE (new project of MAGNETIX with the KAP BAMBINO !!! ), edition of 500.”

To celebrate the new book ‘improvised explosive device’ by kiki & loulou picasso and published by l’Association, the two founding members of the Bazooka collective are exhibiting original works in the Project Room. 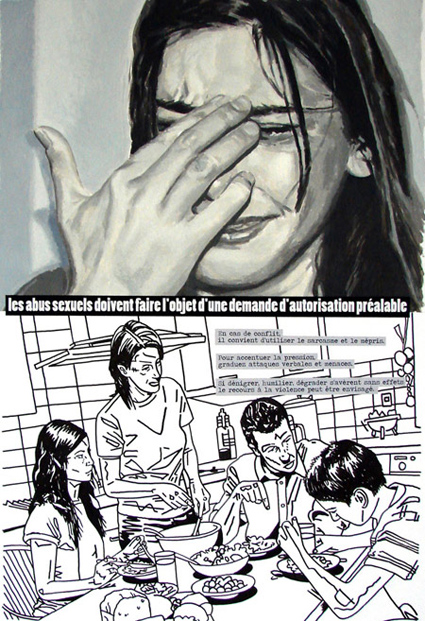 The choice of these artists is a desire of Elzo to pay his respects to those who lead the alternative french scene of the seventies.

Their provocative and politically incorrect artwork is a graphic reply to what punk music culture stands for. The collective implodes at the end of the 70’s due to the frenectic excess that inhabits them. But their heritage is similar to radioactive waste that still radiates through the works of kiki and loulou picasso.