The documentary is a must see for everyone interested in London’s musical history and club culture:?“In the 1960’s Mr. Newton Dunbar came to the UK from Jamaica and founded the first Reggae-oriented music venue called The Four Aces Club, which for some 33 years was home to the most influential black music and musicians to date. 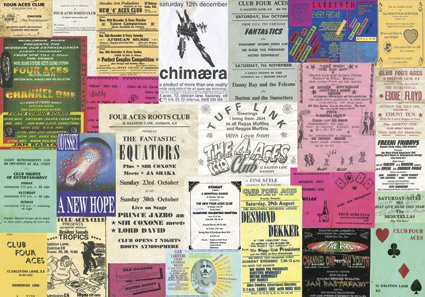 It introduced new music genres to the UK like; Reggae, Ska, Jazz and Soul performed at the time by artists like Desmond Decker, Jimmy Cliff, Count Shelly, Ann Peebles, Percy Sledge, Ben E King, Billy Ocean and many others. This later gave the club authenticity to attract artists like The Clash, Chrissie Hynde, Bob Marley, The Slits, The Sex Pistols, Marc Bolan and Bob Dylan who were heavily influenced by the infectious pulsating rhythms!

It pioneered the early indoor Rave scene during the days of Acid House music in the mid 80’s but despite its success, came under fire from the local Police and was forced to close its doors in the late 90’s due to a compulsory re- possession ordered by the local Authorities to make way for the regeneration in Hackney for the forthcoming 2012 Olympics.”

Olympics at “Planet Hackney” (Overlord X)? Well, we’re looking forward to that, but until then make sure you’ll see the movie at the honourable museum this Sunday.