The photographic essay by Jaka Babnik, subtly entitled We Are Dogs!, is an auto-reflective study, carrying a tendency to deconstruct one of the socially recognized and acceptable forms of fight in its very core. The deconstruction is carried out by both questioning the essence of a man as well as questioning the origins and the purposes of fighting. By doing so, the author ruthlessly leaves it to us to answer such questions. In spite of the elliptical character of the essay pointing out to the man’s relationship with the dog rather than the man himself, the string of photographs illustrates and uncovers the fact, that human nature usurps violence and fights as the field wherein it exercises its power. Exercising power through aggression, fighting and humiliating animals, is not only the final consequence of the destruction which such fighting invokes, but it also speaks of the dehumanization of man. Fighting for an almighty anthropocentric position unfolds itself in the most acceptable form of social combat rituals, the background of which is often covered by a veil of secrecy. What is more, it unfolds itself indirectly, through those lacking access to rational, humanly manipulation. 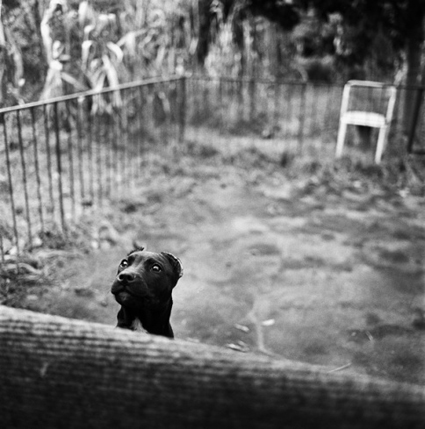 This photographic essay originates from the author’s own reflection of human nature manifested in dog fights. The location and the origin of the photographs are kept secret on purpose, even though this phenomenon practically unfolds itself on our doorstep. As a matter of fact, the location seems irrelevant, since the phenomenon may be interpreted as metonymy for the state of man. Portraits of the dogs are actually portraits of people and rather than speaking of violence as a product of human manipulation, they speak of people, who they are and who they long for to be.
-Katja Praznik