"In 2007, OLIVER PERCOVICH and SHARNA NOLAN arrived in Kabul with little more than a couple of skateboards. In a country where children make up more than half the population, Ollie and Sharna soon discovered that their boards drew in local children like an unstoppable magnetic force. After beginning regular skateboarding sessions in an abandoned Russian fountain in the district of Mekroyan, a group of local boys began to join them. Then came the girls. These initial sessions, informal at first, eventually led to the foundation of Skateistan, Afghanistan’s first co-educational skateboard school. This is Skateistan’s story.

This documentary film follows Skateistan and its founders through the year 2009, documenting their daily struggle to break down social, gender, and ethnic barriers between the children of a war-torn country. As the foreign skaters quickly discover, local custom will only allow girls to skate in public up to the age of 12 – after that there must be no boys or men around. Ollie and Sharna realize that they will need a private indoor facility to be able to continue working with the girls. The city of Kabul, however, has suffered years of foreign invasions and massive destruction caused by civil war, so intact athletic facilities of any kind are nearly non-existent. There seems to be only one solution: build something new! The dream is to create a state-of-the-art indoor skatepark that will provide space to hold all-girl skate classes with experienced female teachers, as well as classrooms and access to multimedia for any boys and girls that are interested – even Kabul’s street kids that have very little hope for their futures.

The film also gives an intimate look into the lives of some of these street kids. We follow them through their daily routines and become witness to the changes in their lives that are triggered by their discovery of skateboarding. The documentary shows how MUJTABA and FAZILA make it back to public school with the help of Skateistan. In the case of WAIS, a talented young skater who seems to have broken out of his street kid’s life, we also become painfully aware of how fragile progress with these children can be.

In contrast, we are also introduced to FEROZ and MAHRO, a boy and girl from some of the more affluent families living in Kabul’s Mekroyan neighbourhood. We experience first hand the difficulties encountered by Skateistan as it attempts to integrate Kabul’s poor street kids into Mekroyan’s more affluent groups of boys and girls.

The filmmakers are in Kabul when Skateistan celebrates the International ‘Go Skateboarding Day’ holiday for the first time, by skating with MUJTABA, FAZILA, WAIS, FEROZ, MAHRO and 30 other children through the broken streets of Kabul from the Olympic Stadium to the Mekroyan fountain. The film documents the skateboard competitions at the fountain, as well as its sabotage by some of the locals who see the daily gatherings of Westerners and skateboarding kids as a security risk. We also accompany the Skateistan team when they visit the orphanage in Kufa for their weekly sessions, bringing tremendous joy into the otherwise joyless lives of its young residents.

Our cameras are there to capture exclusive footage when, for the first time ever, an international group of professional skateboarders including Holland’s LOUISA MENKE, America’s CAIRO FOSTER and KENNY REED, and Syria’s MAYSAM FARAJ visit Kabul to work with Skateistan’s kids and to explore the city for interesting skate spots. We see Kabul through the eyes of these pros and share their emotions when they first encounter Kabul’s street kids. We’re with Louisa when she experiences the challenges to being a female skating in an Islamic world – but we also capture the joy when Skateistan’s kids and the pros skate the streets and landmarks of Kabul together.

Throughout it all, our film tells the story of how Skateistan realized its goal – with the help of the Norwegian, Danish, Canadian and German governments – of building the first skatepark in Afghanistan. We document the meetings with ambassadors, an Afghan construction company and the Afghanistan National Olympic Committee, the latter of which eventually provides the land for what is now the biggest indoor sports facility in Afghanistan. We follow construction of the new skatepark facility until its completion and grand opening on October 29th, 2009.

In the end we show the kids of Kabul skating this amazing new park with the international pros, witnessing the incredible joy and hope that can be generated with the help of a four wheels and a board." 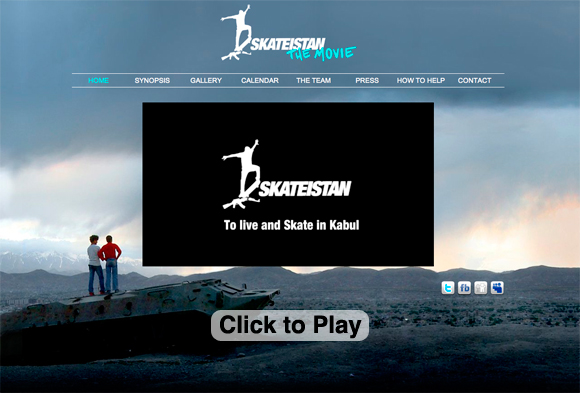