It’s hard to believe it’s already for the 10th time that Carhartt is presenting the ’Etnies European Skateboard Championships’. For more than a decade now, Carhartt has been intensively involved in the European skateboarding scene and widely contributed to showcasing its cultural diversity and creativity. What started in summer 2001 in Basel in close cooperation with Etnies – a strong activist and pioneer of the skateboard scene for over 25 years – has since then turned into a main reference and the most awaited yearly European skateboard contest. More than 300 skateboarders from over 20 cities, amateurs and pros, are on the guest list, and although the weekend is about competition for the best title, the ESC has become more like a family meeting of Europe’s skateboard scene. Every year you can meet the whole spectrum of skateboard culture: the protagonists themselves, the media, the industry, the organizers and of course the fans, who all together make these four days a unique and exceptional event.

On Thursday afternoon the youngsters, 16 and under, start off the show with the Street Junior Champs. On Friday there is the Street Prequalification to find the ones who will compete against 100 prequalified European skaters. Saturday kicks off the Miniramp with the qualification runs, as well as the Street Qualification. Sunday is dedicated to the finals in Street, Miniramp and Girls’ Jam .

Of course on Saturday there will also be a big party where you can have a drink or two. So don’t miss the 10th anniversary of the ESC in Basel! 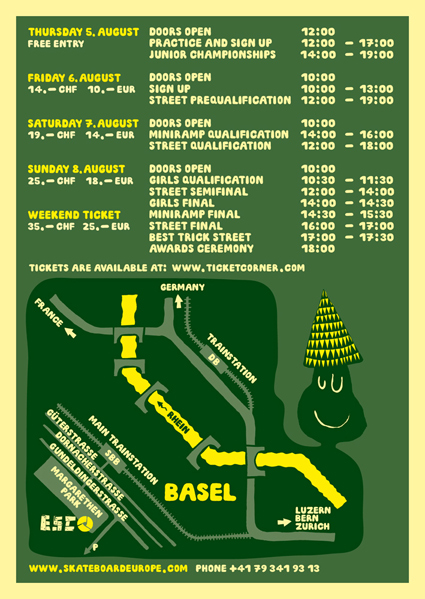