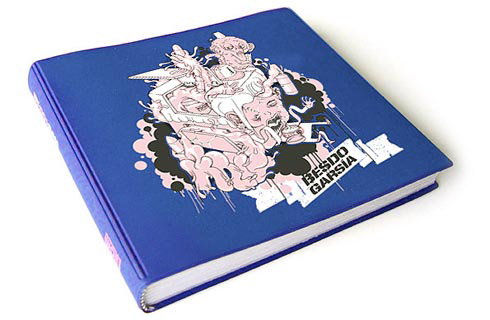 About Besdo Garsia (from the official press note):
“Besdo is a known, loved and respected writer on the streets of Madrid, along with the various crews of which he is a member (KR2, CZB, MMO, Hermanos de Ley). If all of the Die Young share the streets as a common denominator, the artist that we are dealing with this time is perhaps the most dedicated to the urban environment. As you will find in this new book, Besdo forms part of a group of warriors who are still reinventing letters in the old-school graffiti style. His name can be deciphered from a major mess of letters and forms that keep evolving daily on city walls.

Perhaps the mixture of street esthetics and comics caused these letters to mutate into arms and legs with hair, warts or tattoos. Perhaps the cement, the gray and the uniformity of the buildings in the city were the cause for his “Cubeheads.” And the influence that Besdo might have had in common with other artists like France´s Alexöne has caused an evolutionary step and thus the birth of “Cubeheads,” which are without a doubt his most famous and recognized leitmotif. Those who don’t evolve die off. In this sense Besdo is a tireless purveyor of his own style who pushes his boundaries harder and harder as he continues to evolve.”