Zach Sciacca aka Z-Trip is one of the showmen in the worldwide turntablism scene. In his sets he combines Jackson Five with Led Zeppelin, simply delivering some inescapable party energy. It’s like honey and hot milk when they’re melting together, just mixed with Funk Bbreaks, Rock Loops, and Old School Hip Hop.

In Paris he will be supported by Shepard Fairey, who is better known as a famous illustrator and designer then as a DJ. Especially his Hope poster for the Barack Obama presidential campaign made him known worldwide. But nevertheless, his passion for playing some fine Funk, Soul and Hip Hop grooves has always been present. Now he will open the night for Z-Trip, to show that he has got more than just designing some peculiar graphics.

A special night that gives you the chance to experience the undiscovered DJ skills of a famous graphic designer and the inevitable impact of a famous mash-up DJ wizard. 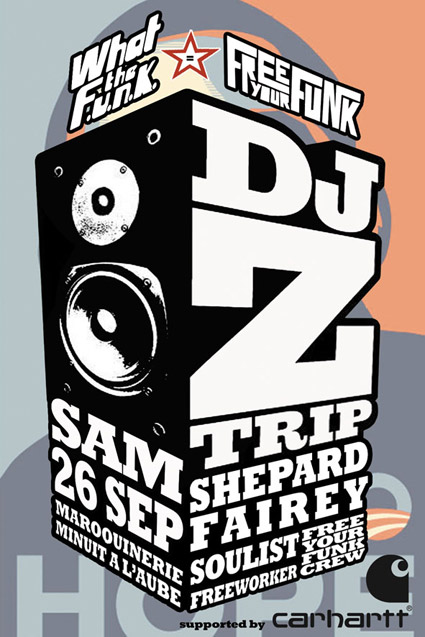