Tomas Barfod, Tomas Høffding, and Jeppe Kjellberg aka WhoMadeWho can already look back on a strong career which inlcudes numerous singles and two highly acclaimed albums for the superb Munich based label Gomma Records. In the past decade they also have been one of the few bands that successfully redefine the term in music with their creative and unique genre-hopping style. Now WhoMadeWho have teamed up with the Cologne based label Kompakt and released their brand-new mini album Knee Deep. The eight new tracks reveal their love for electronic music in conjunction with 60s inspired psychedelic vocal productions. To take a look behind the scenes we hook up with the boys from Copenhagen for a confidential chat.

WhoMadeWho: First of all is great to be on another label – we feel attention from a lot other people than normal – and that great, but besides that this has been the album in our career where have been experimenting the most without being to weird or complex in the production.

Can you tell us a little bit about the writing process of – you wrote the music in a hotel right?

WhoMadeWho: Actually we spend two weeks in a hotel and worked a lot – but the come wasn’t that succesfull – but it’s not the hotels fault – we just where a little confused in that period – in general we are a very confused band – we can’t even make a proper order in a restaurant without changing minds in the middle of the order – that is kind of the story of our lives. All our albums have been made in many different places just to mention a few locations: Sun Studios (one of Copenhagens high-class studios), Barfod’s grandparents beach house, on 70’th floor in a apartment building in Sydney, and a basement without windows.

Tomas Barfod works solo as Tomboy and Tomas Høffding as Bon Homme: do this solo works have an impact on the WhoMadeWho sound?

Tomas Barfod: I don’t really think so – we are these three strong and very diverse personalities – obvioulsy we learn from making music in other contexts, however we really try not to sound like any of our other projects. Also Jeppe doesn’t have a sideproject at the moment and has been great especially because he has been focusing a lot on WhoMadeWho – also in the times where it has been slow.

How would you describe the musical bandwidth of WhoMadeWho in your own words?

WhoMadeWho: We all have many different references and there might only be five bands in the whole world that we all can agree on are a great band, Daft Punk and Radiohead being two of them, besides that our references and musical upbringing have been quite different from each other. Thats very good when we make music together because each of us have a different approach to our music – both technically and in our personal taste.

And when you founded WhoMadeWho in 2004 what was your motive?

WhoMadeWho: A very noble and good one: we wanted to have fun, experiment, and didn’t expect to ever earn any money on it. However it only took a year or so, and then WhoMadeWho was the main ingredient in all our careers. But the way it started was great because there wasn’t really any strings attached – just a common love for experimenting.

Did the chemistry within the band change in the last years?

WhoMadeWho: No – we have always had a great chemistry. We love touring together and a big part of our time on the road is spend doing nice things – going to the beach if we are near one or eating a good dinner. The chemistry haven’t really been changed except that we have been taken ourselfs much more seriously especially the last years and that sometimes this make us more edgy towards eachother.

WhoMadeWho: Our biggest club-hit so far was a cover of the Benny Benassi track Satisfaction. Radio-vise our song Space For Rent.

Can you think of an artist that you’ve always wanted to collaborate with?

You worked since the beginning with Gomma records. Now you moved to Kompakt: why did you change your record company finally?

WhoMadeWho: When we finished the album we realized that we had made a record that Gomma didn´t fully support. They were missing radio-singles, and we didn´t want to make that. We wanted to put out this album without compromising. Therefore it seamed appropriate to work with Kompakt because they were interested in trying to release in a new way. Meaning no physical CD print. Only Vinyl. No big focus on Radio or conventional hits, just focusing on the art of the music.

And how do you think WhoMadeWho is going to sound in five years?

WhoMadeWho: Five Years : No Idea! In five months: We release our second album this year. That album contains more poppy songs. Tracks who could be played in bowling alleys and so on. A bit more straight – for a while. 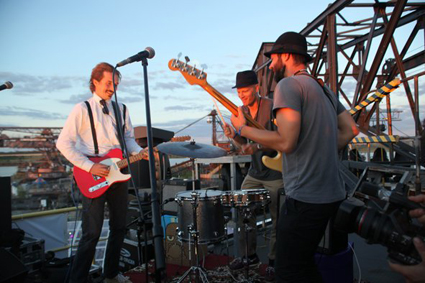 And what can we expect from your upcoming Europe tour?

WhoMadeWho: Loads of new songs coming along. We are playing better than ever, and the band is very enthusiastic. The music we play live is always more uplifting than on the record. Still there is a slightly darker colour imbedded in the new songs. So you can say we are widening the range of colours. We are also adding a keyboard to the live-set, since many of the new songs a very keyboard oriented. Furthermore we play about an hour. That´s a new thing. Before it has mostly been 45 minute sets.

What was your funniest live experience ever? Any special night in mind?

Jeppe Kjellberg: Don´t know why I keep thinking about this concert in Warsaw in the beginning of our band. The promoter/owner of the club was extremely positive about everything. He didn´t have a sound-engineer in the place, but he could easily do the sound… But during the show there was a terrible sound on stage and the PA was making feedback… the soundengineer is gone… we´re fucked! But then we discover the promoter in front of the stage dancing very enthusiastic with a beautiful woman under each arm, white powder dripping from the nose, and a big smile on his face. After that we went hey, lets fuck it. And had a great concert anyhow, just working on the energy of the music!

Jeppe Kjellberg: I play indoor jazz-soccer every monday night at 22:00. It’s a big relief after weekends of touring to play this night-soccer together with my jazz-mates. Working so intensively with the music makes my head spin so much that I need to slow it down. So these days the thing is to take it easy. Read books, go for a walk, and so on.

And how does a normal day of your life look like?

WhoMadeWho: The days change a lot. Monday is weekend. Tuesday and Wednesday is in the studio. Thursday – Sunday, touring-time.

Tomas Høffding: I have a Swedish oldshool farmers house in the middle of the woods. I think I would want to try living there for a year. Building stuff, living off the ground. My life these days is so hectic and diverse, the utopia of simple living is a dragging idea. This will never happen, though…..well maybe when im 80 years old.

And what do you do to keep yourself from loosing it every now and then?

Tomas Høffding: I go to my farmers house in Sweden. And I drive my old Italian police motorcycle through the woods. I wear the same clothes for 5 days and I fix the window where the rain comes in. I build a fire and grill some wieners. Get up early, drink herbal teas. And so on and so on.

Can you name us your current Top 10?

What was your most beloved album in 2010?

Are there any special records from the past that coined your live?

Tomas Høffding: I think for a band as WhoMadeWho this is going to be a long and diverse list. It will make us sound schizo! I heard some strange shit in my very young days because someone stole my parents record collection. Normally you have this cool selection of oldschool stuff in your childhood home, but not me. I am not going to tell you everything, because you will never be able to take me serious ever again. But I think these albums been also important for me: The Who: Who’s next, David Bowie: Hunky Dory, the first The Police album, Pink Floyd: Wish U Were Here, John Lennon: Imagine, Bruce Springsteen: Live 1975-1985, Kliche: Supertanker, Daft Punk: Homework (of cause)!

What are your wishes for the next month?

WhoMadeWho: A finished master of your 2011 part 2 WhoMadeWho album! We know that this interview is about , but we are already laying our final work in the second album of 2011. It’s going to be a great year! We have been working for a long time in a row now, and we are looking forward to take a deep breath in terms of creativity. Creativity is like a muscle, you need to relax it sometimes in order for it to work proberbly.

You live in Copenhagen – can you tell us some nice spots and secrets about your town that you can’t find in any travel guide?

WhoMadeWho: The unisex wooden-fired sauna in Christiania is one. Very low key and cool. Also, if you go from Rådhuspladsen on the street called “Strøget”, after 30 meters, the first Shawarma store on the left has the most beautiful meat you will ever get! Make sure you catch the very first one, there is a lot of bad shit around! Coffee and vinyl in Skydebanegade is a must-visit too!

Finally: how did you select the tracks for your Carhartt Radio show?

WhoMadeWho: We were told to select our own songs and re-mixes. So we selected the ones that we like the most and put them together in a dj-mix that made musical sense. 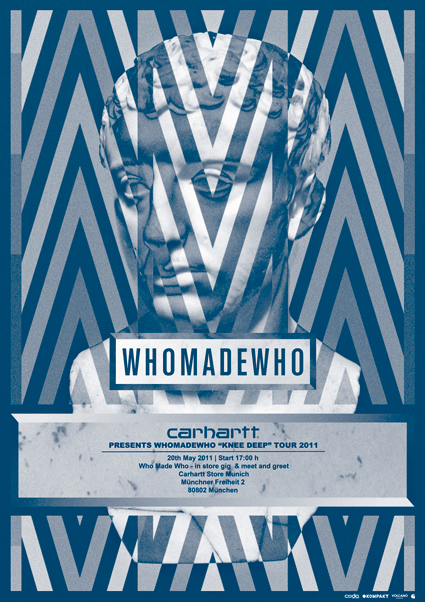