„I think Mayer is the only artist in the history of the label that i’ve signed after hearing only two songs” says Peanut Butter Wolf, man in charge at Stones Throw Records, about his new soul sensation Mayer Hawthorne.
The 29-year-old white kid has produced and played instruments for much of his life, but never intended to become a singer. He isn’t formally trained, and never sang in the church choir or in any of the bands he was in before founding The County. But here he is, new school soul sensation, who has taken the Motown assembly-line production model and eliminated nearly every element but himself and a few hired hands.

Carhartt wanted to know what kind of guy the man from Ann Arbor (Michigan) is and asked him some questions to find out why the multi-instrumentalist loves Soul, Funk and Jazz from the golden sixties and seventies.

Where do you buy your vintage glasses?

Mayer Hawthorne: I’ve been collecting them since I was a kid. Anywhere I can find them. I never pay more than 10 or 15 bucks.

When did you start to do music?

Mayer Hawthorne: My pops plays bass and he taught me to play when I was a young buck. I’ve been playing in bands since high school, but this is my first doo-wop project.

How important is this autonomous producing for your work?

Mayer Hawthorne: I try to play as many instruments myself as I can – I love the challenge. I’ve got a lot of amazing musician friends that help me out though – I definitely couldn’t do it without The County.

How you manage to do soul music that sounds retro without sounding retro?

Mayer Hawthorne: My music is obviously influenced by classic Motown, but I grew up in the 80’s and I’m also a DJ and hip-hop producer, so I approach the music from a different standpoint than an artist from the 60’s would. I hope my music gives listeners the feeling of Motown, but I’m definitely trying to do something new and move the sound forward. 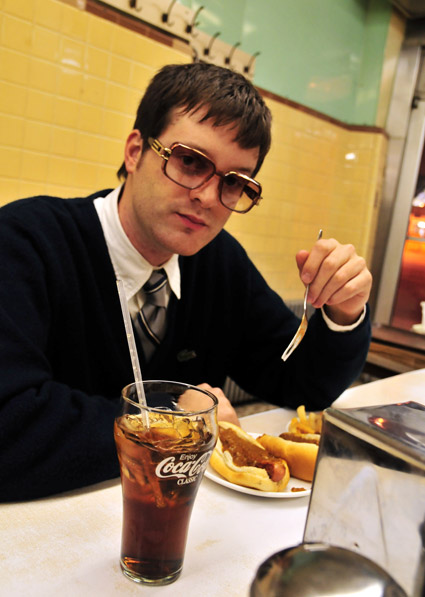 You play live with a full band – how many people are involved?

Mayer Hawthorne: There are 4 core members of The County live band. But there could be up to 8 total.

Where do you get your inspirations for lyrics? Love? Life? Drugs? Music?

Mayer Hawthorne: All of the above. So far my songs are mostly about love and relationships, but that could totally change next week. I try to write about things that everyone can relate to.

What you love more Vinyl or MP3? And why?

Mayer Hawthorne: I’ve been collecting vinyl for over 10 years now so I’m definitely a bit biased. MP3 is an amazing technology and it’s very convenient – but there’s something very magical about vinyl that cannot be duplicated.

Did you ever have singing lessons? Or is your so called „hanging-by-a-string-falsetto” just natural?

Mayer Hawthorne: Ha! Maybe if I took singing lessons my falsetto wouldn’t be hanging so precariously!

How does soulmusic in 2009 have to sound for your ears?

Mayer Hawthorne: It has to be creative just like anything else.

Do play cover versions on stage?

Who are your biggest role models in soul music?

Mayer Hawthorne: My biggest role models are definitely the writers and producers like Smokey, Curtis Mayfield and Holland-Dozier-Holland. You can be the best singer in the world but if your songs suck then so do you.

Is it the first European tour you do? If yes: what are your conceivabilities about Europe?

Mayer Hawthorne: I’ve toured Europe before, but this will be my first time singing soul music. I’m always excited to visit a new place with new culture and people and to try the food.

Would you like to visit the Belgium town Ostende, where Marvin Gaye lived for a while in exile?