Thanks to the spontaneity of French celebrity Bruno Vandelli, the term Quadricolor now forms part of the French cultural heritage. But in this event’s sense it describes the mixture of the 4 artistic personalities known as Ré, Superkero and Beekei, all from French Easypeasy collective and Bastardgraphics, all graphic designers installed between Lyon and Grenoble. For Quadricolor these four have crafted twelve canvases with eight hands and four computermouses by mixing their individual styles and techniques. 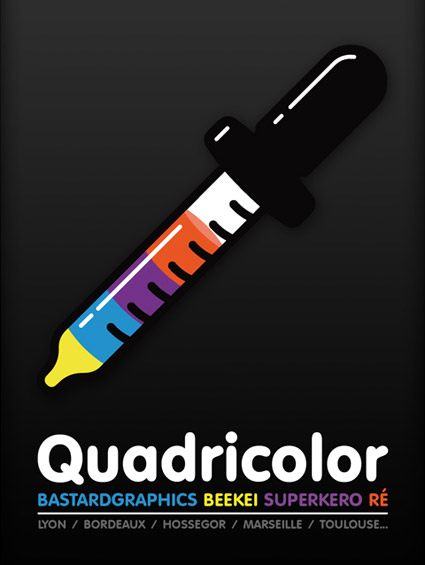 It’s an album compiled of twelve selected canvases based on the twelve chromatic colors – one chromatic color and three of its variations for each canvas – to which each member of the group adds his interpretation and creativity.

And we all know that new albums come with a tour, in our case hosted by Artoyz Lyon and five Carhartt stores in France, to bring you this quadricolorful exhibition.

Get Familiar with Bullion and One-Handed Music