The line up of the three days bash in Bologna looks like an early Christmas gift for all electronic dance music lovers.

Even if you didn’t hear much about this new formation until now, as soon as you read the names of the members you can expect some unheard avant-garde adventures. Later on that evening, Carl Craig is playing one of his DJ-Sets that makes House music sound like a trip to the future.

The next day features a lot of movie documentation about electronic music pioneers like Richie Hawtin or Kraftwerk and gives an insight in the rich history of electronic music.

It’s on Saturday, that the roBOT 2.0 folks cap it all, because they invited the German Techno pioneer Wolfgang Voigt to present his worldwide famous ambient project Gas live with an mind blowing video installation. Later in the night highly acclaimed electronic artists like Seth Troxler, Guillaume & The Coutu Dumonts from Canada or Mirko Loko from Switzerland are playing House and Techno with an edge.

So – if you didn’t have a real good festival summer yet and you love all aspects of electronic club culture, then roBOT.02 festival will definitely give you what you missed out during the last hot months!
And this with a line-up that satisfy each taste for electronic club music.
As the Italians say: Tutti i gusti son gusti. 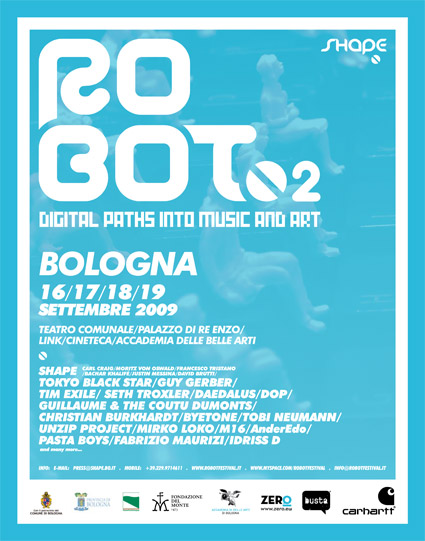