Florian describes WE LOVE YOU as follows: “(…) this project deals with the links between skateboarding and creative habbits. It is about the point of view you get on your environment because of skateboarding. It deals with love and hate in a piece of wood and all the different kinds of creative output that is produced in skateboarding’s own microkosmos. And it may take a look at the kitschy question of this passion, such as: Is it possible to look at skateboarding as an artform?” Speaking about the people he picked to portray in his film, Florian says: “I picked these characters because I have always been impressed and inspired by their work. I like the fact that these guys are going their way without any sell-outs or even selling their motives – which is kind of a kitschy point of view as well. In my eyes, these guys were always up to giving something back to this scene from a very independent attitude.”

To complete the film, Florian is basically only missing Pontus Alv’s part, which will be shot in May 2010. The film will then be released in Autumn/ Winter 2010, we are really looking forward to it. 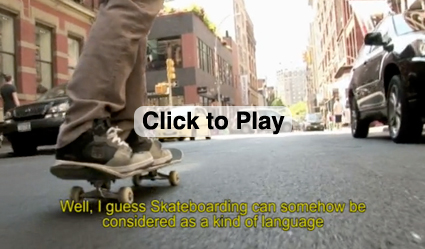 WE LOVE YOU is supported by the “Hessische Filmförderung” and Carhartt.