Info:
Greetings from: The Photography of Phil Jackson Exhibition of American photographer Phil Jackson with a degree from the University of the Art in Philadelphia photography with a focus on life and documentation of the skateboarding subculture studied. 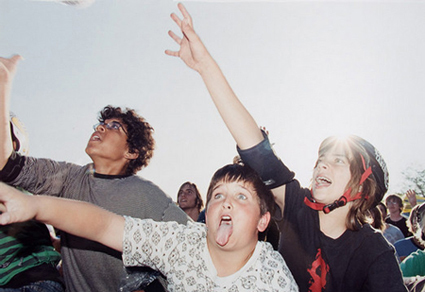 Phil Jackson
„My work is a life-long documentary of the people surrounding me in the subculture of skateboarding. As a child I was drawn to skating by its lack of rules and authority figures, a reason that attracts many athletic kids who are fed up with the rules and regulations of team sports. Skateboarding served as a raw and bloody (often violent) escape from the trite, passé reality of my clean, suburban childhood. This attraction, combined with the fact that skateboarding is outlawed in almost every major city, has led to a scene filled with a unique combination of delinquents and freethinkers (not to mention gluttons for punishment). I have now spent over half my life skateboarding and chronicling the lifestyle that comes along with it. As a participant rather than a spectator, I strive to be as unobtrusive as possible and blend into whatever chaos I am photographing. A frequent subject of mine is budget road life (also known as “the most ghetto way possible”) as my friends and I travel from city to city in search of new terrain to skate. However, by ignoring the literal act of skateboarding and instead focusing on the people of this group, I am celebrating the life and times, trials and tribulations of my surrogate family.“
Phil attended the University of the Art in Philadelphia photography with a focus on life and documentation of the skateboarding subculture studied. He has been working over 4 years as a photographer for the “Concussion” magazine and the Skateshop “Nerd” in Philadelphia and produced fanzines.
www.philjacksonphoto.com

SKATEBOARDING.3D BY SEBASTIAN DENZ AT THE PHOTOKINA 2008 - REVIEW!