The European Skateboard Championships in Basel

For more than a decade now, Carhartt has been intensively involved in the European skateboarding scene and widely contributed in showcasing its cultural diversity and creativity. Its engagement by any ways possible in this really closed up society has generated a strong respect from all its activists, even from the most hardcore of them. Thanks to a huge crew of amateurs and pros cast ironing its army, partnerships made with most of the main events happening on the continent as much as supporting local scenes over the years and helping skateparks to develop and stay alive all over, it can be said that Carhartt is one of the rare companies that has earned its legitimity in skateboarding without being issued from it’s self-made culture and stating a pride of it.

But, this comitment wasn’t complete until something unquestionably remarkable had been set up. It was time to howl that all these introspections were not just a marketing trick to squeeze skateboarders and their attractive lifestyle and then move on something more sparkling,but a true will to get into the flow.

Since 2001, in close collaboration with Etnies, the swiss next door neighbour of Carhartt and strong activist and pioneer since 1986, the European Skateboard Championships have been taking place in Basel every summer in August. Now standing as a main reference for all european skateboarders, the ESC has made its way through tons of other contests to become the most awaited of them,, but also a massive gathering of riders, competitors or not, from jumping kids to longtime carvers! 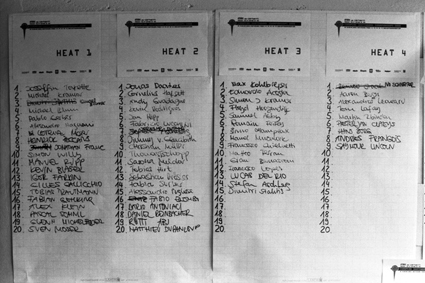 Who knows what really made them spend hours on trains, drive, fly, hitch hike or ride back every year, but what’s sure is that the city of Basel is just the perfect stage for such a pilgrimage; a quiet swiss city inclined to be shaked every year by packs of street kids and that still offers all the facilities for skateboarding and partying with the homies. I don’t mean that Swiss people are angels, but being lost in the streets at night completely drunk has never felt any safer than in this city, where even a waste or a dog shit on the sidewalk feels like a criminal.

The knowledge of skateboarding brought by all the volunteers and organizers of this event has also contributed in making it an example of what you can get when you let people who live their passion express themselves properly. In this way, an amazing and original street course has popped up every year in that naked Ice Ring and the Mini Ramps area happened to be a window on some crazy handlings revealing some more Euro skills each year. In this perspective, the ESC goes well on the timeline close to the never to be forgotten Grand Prix Of Skateboarding of Lausanne, not to say it became a « Classic ».

What also stands out, far away from the usual aspects of any other skateboard contest , far from that stress due to the assaults of hundreds of opponents snapping a headbanging beat with their boards during every trainings and violently smoothing back to back any obstacles , is that atmosphere that floats despite everything during these 4 days of fury. A gentle and sometimes unavowable friendship emanates from every corner of the arena, as if these gladiators where all linked together by something stronger than their fight for any transitory ranking or trophy. Through out these 5 editions, this constant feeling could be delightfully apreciated, beyond the behaviours hiding this obviousness of some of the hardests, breaking the line between the crowd on seats and the crowd on boards , and this i guess was just generated by one thing : That common and intense Love for skateboarding.