Recently he teamed up with the keenly Norwegian singer Christabelle and released the album Real Life Is No Cool. Together they produced ten memerising arrangements, that melt Lindstrøm’s unique Disco deepness with a magic Pop voice.

In Cologne he plays solo in order to deliver restless, hypnotic dance grooves between Disco, House, Balearic, and Cosmic.

Beside him the line-up features with Dixon and Marcus Worgull two central figurs of the contemporary worldwide House nation, who are always good for timeless four-on-the-floor rhythms.

On the second floor straight Techno is king and Gabriel Ananda and Marcel Janovsky play a B2B DJ set to make sure that everybody keep on dancing. 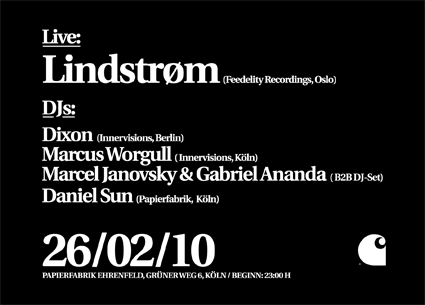